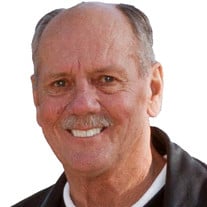 Thomas L. Burton, 80, of Rockford, IL passed away on August 6, 2021 surrounded by his family. Born June 24, 1941 in Port Huron, MI. He wanted to write a portion of his obituary to his family prior to his passing. Obituary is a "noun". Sometimes a sad noun, sometimes a happy noun. I always read the obits every day and hopefully thought I would never see my name. But I did. So it's with great remorse that I leave my many, many, many friends and family I've loved forever. We had fun, we did a lot. I don't think there are many other men that have met and had as many friends as I've had in my short, stubborn, 80 years. But now it's over, so I say goodbye. Below will be listed a bunch of BS about my career. I think I might fabricate a lot so I sound like a real dude, but I just can't believe how much I miss you all. I now begin my bullshit story about what I've done and where I've worked. If you got the time, keep reading and I love you all. Burt (Written by Thomas Burton July 31, 2021) Tom started with Leath Furniture in 1963 as a management trainee and worked his way up through the company, managing many stores across the Midwest until his departure from Leath in 1983. He worked a few years with Pontiac Chair Company then took a job with Mersman Furniture where he worked for over a decade. He then formed Burton & Associates in 1994, retiring from the industry in 2020. He was most active in the Beloit community over the years and was a member of several boards in the furniture industry. He was an avid golfer, playing both locally and internationally. Survived by children; Michelle (Christopher) Guss, and Tara (Craig Pfaff) Burton; grandchildren, Dylan and Ashley Guss; brother, Donny (Gail) Burton. The second of five children, he was preceded in death by his parents; Leatha and Forrest Burton; brother, Forrest Burton; sisters; Beverly (Larry) Heimbach, and Patsy (Sonny) Gorospe. Memorial visitation Monday, August 16, 2021 from 11 am to 1 pm at Grace Funeral & Cremation Services, 4301 N. Main St. Rockford; followed by a Celebration of Life at 1 pm. Chaplain Darren Loeppky of OSF Hospice will officiate. In lieu of flowers, memorials may be made to OSF Hospice, https://www.osfhealthcarefoundation.org/samc-rockford-donation-form/ Share a memory or condolence at www.graceFH.com.

Thomas L. Burton, 80, of Rockford, IL passed away on August 6, 2021 surrounded by his family. Born June 24, 1941 in Port Huron, MI. He wanted to write a portion of his obituary to his family prior to his passing. Obituary is a "noun". Sometimes... View Obituary & Service Information

The family of Thomas Lloyd Burton created this Life Tributes page to make it easy to share your memories.

Send flowers to the Burton family.