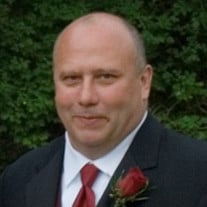 Terry Lee Schenk, 58, passed away December 11, 2019 in his home in Rockton, IL from complications of diabetes. Born September 18, 1961 in Beloit, Wisconsin, he was the son of the late Robert and Mary Jo Schenk. Terry “Impy” attended Hononegah High School and worked as a machinist for the past 35 years. He was well known in Rockton for being the life of the party. He was a die-hard Chicago Bears fan. Terry loved boating down the Rock River and spending time with his daughters. Family meant everything to Terry, and he would do anything he could for them. He was generous and loving, and will be deeply missed. He is survived by his daughters Louisa, Samantha, and Charlotte O’Brien-Schenk of Shirland, IL, Jessica (Geoffrey) Beck of Shirland, IL, and son Jacob Schenk of Dunn, WI. Terry leaves behind his estranged spouse Elizabeth O’Brien. He is survived by his grandchildren Braydon and Bryson Beck, as well as brothers Michael Schenk, Rick (Deanna) Schenk, Raymond (Sheri) Schenk, and sister Sandy (Michael) Cofoid. Terry is also cherished by numerous nieces and nephews. He is predeceased by brother Robert Kephart, sister Carol Kephart, and nephew Brian Cofoid. The visitation will take place at the Prince of Peace Church located at 2336 Freeport Rd, Rockton, IL on Saturday December 14, 2019 at 11am. Funeral service at 12:00 pm. A celebration of life luncheon will be held at Macktown Lounge located at 1339 Dearborn Ave, South Beloit, IL after the funeral.

The family of Terry Lee Schenk created this Life Tributes page to make it easy to share your memories.

Send flowers to the Schenk family.