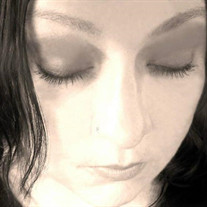 Tamarra A. BaVincio-Legge (Peters), 54, of Machesney Park died on November 18, 2014 at 10:50 p.m. in Rockford Memorial Hospital, of complications from pancreatic cancer. Born on March 4, 1960 in Milwaukee, daughter of Emil and Kathleen E. (Duerr) BaVincio. Her parents divorced when she was very young, and her mother married Derald Peters, who adopted her and her older brother Allen. Tamarra was a graduate of Waukesha County Technical Institute with an Associate Degree in Police Science. She was a published writer and respected editor. Tamarra was an accomplished actress and singer having performed with Amy Grant and the Milwaukee Symphony as a soloist. She was a skilled artist, earning her Fine Arts Degree from Milwaukee Institute of Art and Design (MIAD) in 1996. Tamarra was the 1994 recipient of the UNICO Modern Italian-American award and scholarship. After graduation she started her own company, Designs by Tamarra, and later BaVincio Studios. Tamarra went on to have a very successful art career, showing her work in New York, Chicago, and Milwaukee. She specialized in oils, and also used many other mediums, including sculpting and photography. Her body of work was greatly influenced by her travels throughout Europe. Tamarra's art was showcased at many shows in the Rockford area, including the annual Alzheimer's Foundation show, Unforgettable Art, a cause very close to her heart. Additionally, she participated in Art Scene and organized art shows at Main Street Studios. Tamarra met her beloved husband, best friend and biggest fan John Legge in 1998. They were united in marriage on April 22, 2006. Tamarra is survived by her husband, John; sons, Joseph Duerr and Derek Peters; mother; brother, Allen; half-sister, Cindy Peters; half-brother, Ben Peters; brother-in-laws, Charles (Terri) Legge, Frederick (Betti) Legge; 4 nephews and 3 nieces. Proceeded in death by her grandparents, and father. A Celebration of Tamarra's life will be on December 13, 2014 with Visitation at 1 p.m. and Memorial Service at 2:00 p.m. at Grace Funeral & Cremation Services, 1340 South Alpine Rd. Rockford – At Colonial Village. Cremation rites have been accorded. Grace Funeral & Cremation Services is assisting the family. To share a memory or condolence, visit www.graceFH.com.

The family of Tamarra A. BaVincio-Legge created this Life Tributes page to make it easy to share your memories.

Send flowers to the BaVincio-Legge family.