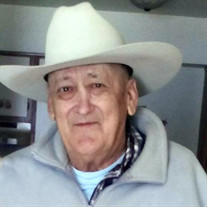 Stephen Laverne Triplett, 75, of Rockford died on February 13, 2016 in his home. Born on November 1, 1940 in Oxford, IA, son of George and Lela (Kent) Triplett. United in marriage to Darla Carter on February 1, 1968. Survived by his wife,... View Obituary & Service Information

The family of Stephen Laverne Triplett created this Life Tributes page to make it easy to share your memories.

Send flowers to the Triplett family.