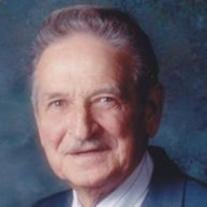 Samuel C. Berchiolly (Sam the Carpet Man), 89 of Rockford died March 6th 2012 in his home after a long illness, surrounded by family and loved ones. Born October 30, 1922 in Rockford, the son of Thomas Berchiolly and Flossie (Fuller) Berchiolly. Attended Rockford Senior High School, where he was on the Diving Team. He married Nellie L. Veitch on November 22, 1939: she died May 13, 1992. He served in the United States Marine Corp. in World War II, stationed out of Noumea, New Caledonia, in the South Pacific. He fought in three major campaigns in Saipan, Tarawa and Tinian. He was wounded in the bloodiest battle of the South Pacific at Tarawa, and wounded again at the battle of Tinian. He was sent home in 1946, because of the two wound law passed by Truman. His service medals include Two Purple Hearts, Asiatic Pac and Presidential Citation. After the war he and his family lived at Camp Grant and he worked many jobs, including at Barber Coleman, before starting his own business, Berchiolly’s Carpet Service. He worked for many stores throughout Rockford, a few of them being, Rockford Standard Furniture, Fred Thompson Design, Farmer Brothers, and Johnson-Olson Carpet World. He was an avid fisherman, archer and hunter. Sam loved to dance and listen to classical music. He was part of a group of men called the “Angling Eight” and enjoyed annual trips to Wards Resort at Balsam Lake, WI with his buddies. He belonged to the Lithuanian Club, Verdi Club and Rockford Skeet and Trap Club, where he taught most of his oldest children how to shoot bow and pistols. He was also on a mixed doubles bowling league with his wife, Nellie. He loved the outdoors and gardening, no matter where he lived, he always had a vegetable garden and loved to grow roses. He was very lucky at the slot machines and enjoyed playing cards and pool with his friends at the Keen Center in Belvidere, IL, watching the Western Channel and playing his harmonica. He is survived by his loving companion and sweetheart, Virginia Marquardt, and children, Sam (Dianna) Berchiolly of Madison Heights, MI, Judy (Russ) Arnold of St. Charles, IL, Danny Berchiolly of Rockford, IL, Jennifer Rondone of West Palm Beach, FL, Jackie (Frank) Fasula of Rockford, IL, Kris Berchiolly of Machesney Park, IL, Corlis Berchiolly of Rockford, IL, Lorrie (Donald) Bondick of Rockford, IL, He is also survived by Nineteen Grandchildren, Fifteen Great Grandchildren and Three Great-Great Grandchildren. Predeceased by parents and brothers, Thomas Berchiolly of Rockford, IL and Floyd Berchiolly of California, son Thomas Berchiolly of Rockford, IL and grandson Tony Rondone of Rockford, IL . Special Thanks to Meghan Celia, Gena Spataro, and Northern Illinois Hospice. Sam donated his body to the Anatomical Gift Association of Illinois. A memorial service will be held on Monday, March 12, 2012 at 5:00 p.m. at Heartland Community Church,1280 South Alpine Rd. Rockford; Pastor Greg Carlson will officiate. Visitation beginning at 4 p.m. until the time of the service. Grace Funeral Home & Cremation Services is assisting the family. To share a memory or condolence visit www.graceFH.com.

Samuel C. Berchiolly (Sam the Carpet Man), 89 of Rockford died March 6th 2012 in his home after a long illness, surrounded by family and loved ones. Born October 30, 1922 in Rockford, the son of Thomas Berchiolly and Flossie (Fuller) Berchiolly.... View Obituary & Service Information

The family of Samuel Charles Berchiolly created this Life Tributes page to make it easy to share your memories.

Send flowers to the Berchiolly family.