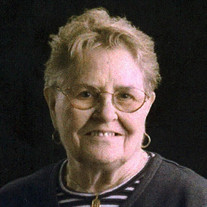 Ruth Iuta Kreitzmann July 1, 1923- June 7, 2017 Ruth Iuta Kreitzmann, 93, of Beloit passed away at Alden Meadow Park in Clinton, WI, June 7, 2017. Born in Bemis, TN July 1, 1923 to Mahon and Creo Collins. Graduated from J.B Young High School in Bemis, then moved to Boston, MA, where she attended business college. After graduation, she moved to Washington DC where she worked for the United States Army as a secretary. She met and married Capt. Orville Edward Kreitzmann Sr. on August 21, 1943. After his discharge from the Army, they moved back to Beloit, her husband’s hometown and lived with his parents until the birth of their daughter, Rowena, later moving to Rockton, IL. Attended The Old Stone Church, where Ruth was very active; later she returned to Rockton and again became active in the church, serving as a Deaconess for many years. She especially loved Thanksgiving Dinner at the church, cooking for days with all of the ladies. In 1951 she moved to Tennessee, living on her parents farm in Bemis. Their sons Orville “Joe” Jr. and Marvin David were born. She moved back to Rockton in 1962, where she met neighbor, Dot Sullivan and her husband, Bob, and their seven boys. Dot remained her best friend for 47 years, before she passed away in 2015. Throughout her life Ruth loved her family daily, when asked what she did she would say she was a nanny to the many children she babysat throughout the years. She loved flowers, which she grew so well; all animals, having many strays that she kept; her schnauzer, Snozer, cats, Princess and Beggar and Myna bird, Jimmy. She had and open heart and open door to the many “stray” boys, friends of her boys in high school that lived with her, when they needed a loving place to call home. They followed her rules and all finished school, so many others call her Ma K, and loved her. After her husband passed away she moved back to TN to care for her now elderly parents, until they passed. In 1992 she moved to Iowa, to house and pet sit while her daughter and family moved to Egypt. Her Iowa neighbors, Morie and Sherry Kallberg watched out for her and made her an honorary member of their family. After her daughter and family returned she remained with them, doing what she did best, helping them raise and care for their four adopted daughters! The girls always loved her, running to her room for hugs and kisses. Granny Ruth always made everything better! They were often found there, all piled on her bed for a talk or a nap! She moved with them to IN, then Phoenix, AZ, where she son-in-law, Deo retired from the construction business. She loved living there, as one of her passions was cacti, especially the Saguaro. In Mesa, she and Rowena became members of the Rockton Group, meeting once a year with 100 others from Rockton for a pancake breakfast and get together. She was also reunited with Betty and Lowell Peterson, Rowena’s former in-laws, and longtime friends, visiting back and forth for several years. Other special friends in her life were Rowena’s sister-in-law, and her husband, Bill and Cleo Lommers. On a trip to Washington State, they took her everywhere and showed her all that there was to see. Predeceased in death by her husband, parents, her infant sister, Evelyn; brothers, Fleetwood and David; son-in-law, Deo Rogers; nephew, Steve Collins; nieces, Suzanne Collins-Crowley, Pamela Collins-Douglas; very special people in her life always, first-cousins, Johnny and his wife, Grace, Anita Temple and her husband Richard, sister-in-laws, Mary Alice Collins, Betty Jo Collins; Grace and Mary Alice were like sisters all her life as Anita and Betty Jo were! Last was her granddaughter, Linda Mixon, 38, on April 20, 2016. Linda left four beautiful little girls behind, Jade, Tessa Ruth, Micah and Chelsa, whom she loved so much. Survived by daughter, Rowena Ruth Rogers of Beloit, WI; sons, Orville Edward “Joe” (Traci) Kreitzmann Jr. of Rockton, Marvin David (Shelly) Kreitzmann of Clinton, WI; grandchildren, Jason Peterson, Dana Rogers, Donald Rogers, Cindy Soptick, Destiny Rogers, Shawna Cate, Mary Kavena, Criss Kreitzmann, Katy (Phillip) Statler, Erik Kreitzmann, Ricky Herter, Joseph Kreitzmann, Tyler Kreitzmann; nephew, Mike Collins; nieces, Brenda Woodlee, Allison Collins-Henley, Donita Temple Gustas; 19 great-grandchildren; 8 great-great-grandchildren. Many thanks to St. Croix Hospice of Delavan and staff; Mary RN, Patti, CNA, Social Workers and Clergy. Also the entire staff of Alden Park Meadow, special thanks to Denise RN. Big thanks to CNA’s Kahseanna, Amanda, Tracy, Alicia and Rosemary. Her physician Dr. Tecaro of Beloit Clinic and Dr. Taveras of Beloit Heart center for their wonderful and respectful care. Memorial Service on July 1, 2017 at 10:30 a.m. at the Old Stone Church, 101 E. Union St. Rockton. Rev. Daniel J. Herman will officiate. Luncheon to follow. In lieu of flowers, donations to the Salvation Army or Humane Society in memory of her loving and caring for people and animals. Also many thanks to Bob and Kristan McNames of Grace Funeral & Cremation Services, in Rockford. Rest in peace with the Lord mama! We were so blessed to have you so many years! Love, Rowena, Joe, David and Families…Share a memory or condolence at www.graceFH.com.

The family of Ruth Iuta Kreitzmann created this Life Tributes page to make it easy to share your memories.

Send flowers to the Kreitzmann family.