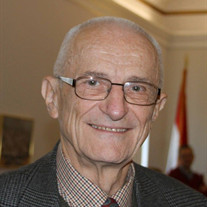 Rockford, Illinois - Rudolf Vedo, MD, passed away on December 31, 2020, after a brief illness. Born in 1939 in Zagreb, Croatia (then Yugoslavia), Rudolf completed his medical training at the University of Zagreb in 1964 and internship in Duga Resa, Croatia. He initially planned to become a surgeon and moved to Bremen, Germany, where he began his surgical training. In 1967, he married the love of his life, Dubravka, and had two sons, Rudi Jr. and Tom. After initial plans for a surgical career were unfortunately derailed by a minor medical condition, he switched paths and ultimately found his calling in anesthesiology, which allowed him to continue to make use of his affinity for the operating theater. After completing his internship in Chicago, Illinois and residency training in Milwaukee, Wisconsin, he joined Rockford Anesthesiologists Associated, where he spent 25 years serving the needs of patients at hospitals and surgical facilities throughout the greater Rockford area. In his career, he was known as a skilled, caring physician and genial colleague, who was always proud of his ability to put nervous patients at ease. After his retirement from RAA in 2000, Rudolf built a second home in Slovenia, where he enjoyed spending time with his family and friends, and especially his grandchildren, Pavao and Jana. During summers he would usually be found taking them on excursions to show them the beauty of the surrounding countryside, cultural activities across the border in Zagreb, as well as teaching them how to build and fix all manner of things, and helping them to become the caring, accomplished young people they are today. Rudolf will be remembered by all who knew him a loving husband and father, doting grandfather, and good friend. He is survived by his loving wife Dubravka (Morovic) of Rockford, sons Rudolf Jr. (Tomislava) of Zagreb, Croatia, Tomislav Vedo of Rockford, grandchildren Pavao and Jana of Zagreb, Croatia, brother Ivan (Nada) of Croatia, and many nieces, nephews and cousins and in-laws. Grace Funeral Home is assisting the family with arrangements. In lieu of flowers, memorials can be made to the Swedish American Foundation at 1401 East State Street, Rockford, IL 61104. Memorial Visitation; Friday, January 8, 2021 from 1 p.m. to 3 p.m. at Grace Funeral & Cremation Services, 4301 N. Main St. Rockford. Private family funeral service; webcast of funeral will be available at 3 p.m. on January 8, 2021 here: http://www.gracefh.com/obituaries/permalink/9788169/LTWebcast Share a message of condolence at www.graceFH.com.

Rockford, Illinois - Rudolf Vedo, MD, passed away on December 31, 2020, after a brief illness. Born in 1939 in Zagreb, Croatia (then Yugoslavia), Rudolf completed his medical training at the University of Zagreb in 1964 and internship in Duga... View Obituary & Service Information

The family of Rudolf Vedo MD created this Life Tributes page to make it easy to share your memories.

Send flowers to the Vedo family.