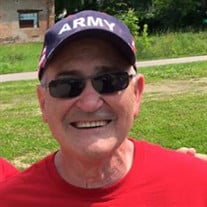 Robert Curtis Falk, 72, of Winnebago died on July 29, 2015 in Rockford Memorial Hospital from injuries sustained in a fall. Born on September 26, 1942 in Rockford, son of Curtis and Nellie (Knodle) Falk. Robert graduated from Pecatonica High School in 1960. He served in the United States Army, stationed in Vietnam. United in Marriage to Barbara Sherman on October 25, 1963. Robert was formerly employed at Ipsen Labs, and at National Lock, where he completed his Tool and Die Apprenticeship. He retired from Chrysler, after 41 years of service where he was employed in various management positions, most recently as the facilities manager. He obtained his Associate Degree from Rock Valley College in 1980, and his Bachelor Degree from Concordia College in 2000. He was respected by his peers and colleagues and liked by everyone he encountered. Robert enjoyed hiking and biking, and his trips to Colorado. He liked to visit Starbucks and spent lots of time at his local gym working out. He was a member of Heartland Community Church, where he was active in Men’s Fraternity and Sharefest. Survived by his wife, Barbara; children, Carrie Falk of Pecatonica and Chris (Jen) Falk of Austin, TX; grandchildren, Hannah, Connor and Greyson Falk, Jacob Wilhelm, and Emma Watson; siblings, Doris (Dave) Clauson of Rockford, Sharon (Mike) Farrell of Cedarville; sister-in-law, Denise Falk of Winnebago; and several nieces and nephews. Preceded in death by his parents and brother, Richard Falk. Visitation on Sunday, August 2, 2015 from 2:00 p.m. to 4 p.m. at Heartland Community Church, 1280 South Alpine Rd. Rockford. A Celebration of Robert’s Life, Monday, August 3, 2015 at 11:00 a.m. at the church, with visitation at 10:00 a.m. until the time of service. Pastor Gordy Smith will officiate. In lieu of flowers, memorials in Robert’s memory may be made to Heartland Community Church or the Salvation Army. Private interment in Willwood Burial Park. Grace Funeral & Cremation Services is assisting the family. To share a memory or condolence, visit www.graceFH.com.

The family of Robert Curtis Falk created this Life Tributes page to make it easy to share your memories.

Send flowers to the Falk family.