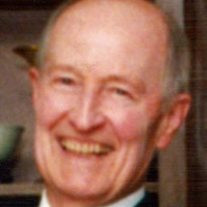 Robert L. Clodius, 93, of Rockford died on April 2, 2014 in OSF St. Anthony Medical Center, after a short illness. He was born March 10, 1921 in Walla Walla, WA, son of Hans and Emma (Wellman) Clodius. He grew up on the family farm. Graduating top of his high school class, Robert attended Whitman college. WW II intervened and after graduation Robert enlisted in the Navy, attended officers school at Northwestern University and at 22 years of age joined the admirals staff and became "Officer-in-Charge" of munition supply for the entire 7th Fleet. His service there earned him a commendation ribbon from the Admiral. Afterwards he was enrolled at the Universityof California, Berkeley when he met his life's partner, Joan [Coyle], they married August 27th. 1949. After completing his PHD, they relocated to Madison, WI. where Robert took employment as an Assistant Professor at the University of Wisconsin. Over 20 some years he earned 4 professorships in three colleges, as well as serving as vice president and [acting] President of the University. Robert continued work teaching and directing educational programs internationally. Asked to join the National Association of State Universities and Land Grant Colleges, in Washington DC. he served as its President. Retiring from the association, Robert and Joan relocated to Rockford in 2000 to join their family. He enjoyed gardening and became a docent at Anderson Japanese Gardens, and a Master Gardner. He served on boards at Rock Valley College and the Music Academy at Rockford College. Member at St. Mark's Lutheran Church, the Navy Club and the Downtown Rotary Club. Survived by children, Catherine Clodius of Madison, WI; Mark, and Daughter-in-law Monika, Clodius of Rockford; their children, Christopher Clodius, and Annabel Clodius. Preceded in death by his parents, 4 siblings, and beloved wife Joan on January 29, 2012. A Celebration of Life will be on April 12, 2014 at 1:00 PM at St. Mark Lutheran Church, 675 N. Mulford, Rockford. Rev. Dr. Mark Hagen will officiate. Memorials may be made in Robert’s name to the Downtown Rockford Rotary Club. Grace Funeral & Cremation Services assisted the family. To share a memory or condolence, visit www.graceFH.com.

Robert L. Clodius, 93, of Rockford died on April 2, 2014 in OSF St. Anthony Medical Center, after a short illness. He was born March 10, 1921 in Walla Walla, WA, son of Hans and Emma (Wellman) Clodius. He grew up on the family farm. Graduating... View Obituary & Service Information

The family of Robert L. Clodius created this Life Tributes page to make it easy to share your memories.

Send flowers to the Clodius family.