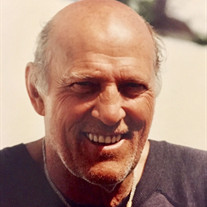 Robert “Bob” Isaac Chapman passed away on Friday, October 30, 2020 at the age of 87. He was born in a barn in Pecatonica, Illinois to Lela Mae (Kesselring) and Roland Lee Chapman. Bob was the youngest of 12 children. He married Janet Johnson in 1958. Together they had six children and made their home in Rockford, Illinois. Bob is survived by his 6 children, Laura (Daniel) Green of Lake Geneva, Wisconsin, Robert Chapman of Los Osos, California, Gregory (Serrina) Chapman of Eureka, California, Barton Chapman of Mount Horeb, Wisconsin, Lee (Allison Lukes) of Decorah, Iowa, Gina (Kerry) Treadman of Lake Summerset, Illinois; 13 grandchildren; Eva, Gillian and Nolan Greene, Brianna and Ryan Chapman, Soren Chapman, Emma, Tevye and Levi Chapman, Isaac, Cason and Addison Blue and Angelina Pumo; 1 great grandson, Finnley Chapman; 2 step-grandchildren; Payton and Addison Treadman; countless nieces, nephews, and cousins. Bob was an electrician by trade. A member of IBEW, he worked at Byron and Morris Nuclear Power Plants. After retiring from the union, he relocated to Decorah, Iowa, where he worked at Luther College. During that time, Bob was a host-father to five foreign exchange students. Bob was an environmentalist at heart. In 1997, he pioneered the Food Waste Composting Program at Luther College in Decorah. Bob loved nature and the outdoors, and he instilled this love in his children and grandchildren. Whether birdwatching, paddling a river, hiking through the woods, or tending to his garden, this is where he was the happiest. He often said he felt closer to God in his tomato patch than anywhere else. He was a die-hard Green Bay Packer Fan. He proposed to his wife, Janet, a Chicago native, with one contingency…that she agree to raise their children as Packer fans. And they did. They even went so far as to name three of their sons after Packer players. Bob was affectionately known as Big Bubs by his family and many friends. He will be remembered for his humor, kindness, integrity, and compassion. Always giving to others, his end-of-life’s wish was to donate his body to the University of Iowa for Science research. However, because of Covid-19, that wish cannot be filled. Bob's family is grateful to staff of Walnut Acres for their loving care. A memorial service will be held in the near future. In lieu of flowers, donations in Bob's Memory may be made to the Alzheimer's Association, 1111 N. Alpine Rd. Rockford. Celebrate Big Bubs life in a way that he would want. Raise a glass of your favorite drink, plant something, cheer for the Packers, take a drive in the country, make a donation to the Alzheimer’s Association, play a game of pinochle with friends, indulge in a big bowl of ice cream, or listen to a Bob Dylan song. May God Bless and keep you always, May your wishes all come true, May you always do for others, And let others do for you. May you build a ladder to the stars And climb on every rung May you stay forever young.

Robert &#8220;Bob&#8221; Isaac Chapman passed away on Friday, October 30, 2020 at the age of 87. He was born in a barn in Pecatonica, Illinois to Lela Mae (Kesselring) and Roland Lee Chapman. Bob was the youngest of 12 children. He married Janet... View Obituary & Service Information

The family of Robert Isaac Chapman created this Life Tributes page to make it easy to share your memories.

Send flowers to the Chapman family.