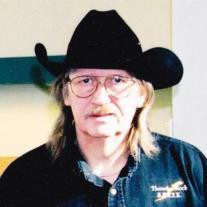 Time Passes, Memories Remain Richard “Rick” “Moonshine” Gasaway, 59 of Rockford died on Thursday, August 19, 2010 surrounded by his family. He was born on January 28, 1951 in Greencastle, IN, son of Malon and Catherine Gasaway. Rick was last employed as a sprinkler fitter. He served as an election judge, and was a member of ABATE, where he held several officer positions. He enjoyed teaching safety classes at local high schools, educating students on motorcycle awareness. Rick’s favorite show was Star Trek. He read the Harry Potter books multiple times, and loved everything to do with flying, including building model rockets with his grandson, Evan. His favorite NASCAR driver was Kasey Kahne. Rick is survived by his brother, James Gasaway; sister, Linda York both of Rockford and was affectionately known as Papa Rick by his grandsons, Timothy (Chrissy) Fair of Cherry Valley and Jeremy Fair of Rockford, and their children and grandchildren. He was preceded in death by his grandparents, parents and brother in law, Reggie York. A Celebration of Life Service will be held on Saturday, August 28, 2010 at 2 pm at Grace Funeral & Cremation Services, 1340 South Alpine Rd. Rockford, with visitation one hour prior to the time of service, followed by an open house at Rick’s home, 4822 Sovereign Blvd. Rockford. Pastor Jeff Bergstrom, of Heartland Community Church will officiate. In lieu of flowers, memorials may be made to the family. To share a memory or leave a condolence online, please visit www.graceFH.com.

The family of Richard "Rick" "Moonshine" Gasaway created this Life Tributes page to make it easy to share your memories.

Send flowers to the Gasaway family.