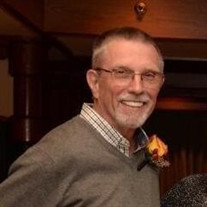 Peter Glen Church, of Rockton Illinois, passed away on Wednesday, December 15th at the age of 79. After years of battling Parkinson's disease, Pete died peacefully at Beloit Memorial Hospital with loved ones at his side. Peter was born in Milwaukee, Wisconsin on August 18th, 1942 and raised by father Glen and mother Lola (Coon) Church. He was the youngest of 4 siblings, Ralph (Mabel) Church, Betty (Bob) O'Leary and Beverly (John) Whaley. All of which have preceded him in death. Peter was raised in Janesville Wisconsin. He graduated from Janesville High School, class of 1960. After graduation, he jointly opened a specialty shoe store in Janesville Wisconsin. His retail ambitions were brief and he quickly turned to Financial Services. Peter's Financial Services career spanned almost 40 years with a variety of institutions near the Illinois/Wisconsin state line. This includes 1st. Savings and Loan of South Beloit, Amcore Bank, First American Credit Union and ultimately retiring from Advia Credit Union. Throughout his career, Peter also returned to school to earn multiple degrees and certifications in banking. Peter was a loving and devoted family man. He has been united in marriage to Linda (Burton) Church since May 12th 1990 and they have resided in Rockton ever since. They loved their time together, both at home on the river, as well as time with friends in their favorite local establishments. Throughout his life, Peter was an active volunteer with many local community organizations. This included the Janesville Jaycess, the Beloit Noon Lions, the Stateline Boys and Girls Clubs and the Rockton Township Board. His volunteerism was his religion and his way of giving back. As a father, Peter was a great educator, coach, mentor and friend. What he wasn't was an expert at building Boy-Scout pinewood derby cars, but that's a story for another time. Peter was the go-to for sage advice for both his two natural sons and two daughters of his extended family. He was a wizard with the financial calculator and investment advice. He not only put this knowledge to work at home and in the office, but for a brief period, Peter taught banking classes at Rock Valley College. Outside of family, work and volunteering, Peter had two other passions; golf and the Green Bay Packers. Peter was an avid Packer fan his entire life. He enjoyed watching the Packer games with his family and friends. He was green and gold in the good year as well as the during the 80s..........or that brief period where the Bears were a formidable opponent. Golf was his other recreational passion. He enjoyed playing it in almost any condition. It was also his go-to father/son get-together for Father's Day and birthdays alike. Peter enjoyed playing all the local state line courses but always looked anxiously to his annual boys trip to Biloxi MS. Peter is survived by wife, Linda; children, Michael Church, Mark (Monika) Church; and their mother, Pat Kothe; step-children, Michelle (Chris) Guss, Tara (Craig Pfaff) Burton; grandchildren, Tyler (Megan), Matthew, Abigail, Myles, Maddison and Maddox Church, Lilly Pfaff, Dylan and Ashley Guss: great-grandchild, Imogene Church; sister-in-law, Gloria Wilson; brothers-in-law, Gary (Barb) Adler, Wayne (Pam) Adler; cats, CoCo and CeCe. A special thank you to wonderful and attentive staff @ Beloit Memorial Hospital for not only this most recent visit, but the care you have provided throughout his fight. A Celebration of his life will be held in the near future. Memorials in his memory may be made to Beloit Regional Hospice or the Michael J. Fox Foundation for Parkinson's Research. Grace Funeral & Cremation Services has assisted the family. Please share a memory or condolence at www.GraceFH.com

Peter Glen Church, of Rockton Illinois, passed away on Wednesday, December 15th at the age of 79. After years of battling Parkinson's disease, Pete died peacefully at Beloit Memorial Hospital with loved ones at his side. Peter was born... View Obituary & Service Information

The family of Peter G. Church created this Life Tributes page to make it easy to share your memories.

Peter Glen Church, of Rockton Illinois, passed away on Wednesday,...

Send flowers to the Church family.