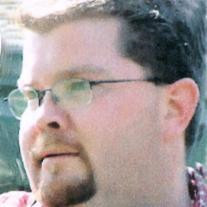 Defined by his faith, wisdom and wit Paul William Dawson, 38, of Rockford went home to be with Jesus on Thursday, February 17, 2010, after a 6 year journey with ALS (Lou Gehrig’s Disease). Paul was defined by his unshakable faith, immense wisdom, and uncanny wit. Paul married his best friend and life partner, Melissa Irwin on March 22, 2003 at Heartland Community Church, the place they met. Paul was an amazing partner, who cared deeply about his wife’s interests, hobbies and passions. Paul encouraged and supported his wife in pursuing her dream of owning a music studio. Working together to make the dream a reality, he designed and drew the blueprints for Forest City Music Studio. Paul was the son of James and Martha Dawson of Rockford. He was born on July 5, 1971 in Lakeland, Florida. He graduated from Streator High School in 1989, and obtained his Aircraft Mechanic Certificate. Paul loved anything having to do with Jeeps, camping and playing Scrabble. Ever since childhood, he enjoyed installing car audio systems. Paul was a talented and creative designer; among other things, he designed his backyard fire pit where he spent many nights making memories with family and friends, quilt patterns on his computer, and lighting designs while serving on the Heartland Tech Team. He also participated on the Worship Team, and served as a Growth Group Leader and Host. Paul is survived by his wife, Melissa. He was eagerly anticipating the arrival of their baby boy, who is expected July 23, 2010. Paul is also survived by his parents; brother, Keith (Deb) Dawson of Rockford; sister, Nancy (Chun) Seow of Vancouver, BC; in-laws, Ken and Paula Irwin of Rockford; sister-in-law, Michelle (Jason) Gautier of Rockford; nieces and nephews, Kathryn Seow, Oliver, Ophelia, Zion, and Zebedee Gautier; aunts and uncles; several cousins; and pet beagles, Teegan and Libby. Paul’s family would like to extend a special thanks to the many CNA workers who cared for him. Visitation will be held on Sunday, February 21, 2010 from 3-6 pm at Heartland Community Church, 1280 South Alpine Rd. Rockford. A Celebration of Paul’s Life will be on Monday, February 22, 2010 at 11:00 am, with a visitation at 10:00 am. Pastors Doug Thiesen, Mike Breaux and Bill Allison will officiate. Cremation rites will be accorded. Grace Funeral & Cremation Services is assisting the family with arrangements. Please share a story or memory of Paul online, at www.graceFH.com. Memories and stories will be shared with his son. In lieu of flowers, a memorial has been established in Paul’s name (to Melissa Dawson).

Defined by his faith, wisdom and wit Paul William Dawson, 38, of Rockford went home to be with Jesus on Thursday, February 17, 2010, after a 6 year journey with ALS (Lou Gehrig&#8217;s Disease). Paul was defined by his unshakable faith, immense... View Obituary & Service Information

The family of Paul William Dawson created this Life Tributes page to make it easy to share your memories.

Defined by his faith, wisdom and wit

Send flowers to the Dawson family.