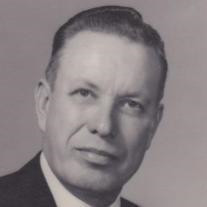 Orrill M. Dunn, 93 of Rockford died at 1:09 pm on Thursday, April 22 in Rockford Memorial Hospital. Orrill was born on November 19, 1916 in Rockford, son of John and Ora (Phelps) Dunn. He graduated from Miami University of Oxford, OH. While attending college he served as a student pastor at Seven Mile and Darrtown, OH Methodist Churches. He later served at Evans Memorial United Methodist Church, Harlem and Winnebago Methodist Churches in Illinois. In 1940 he married Elizabeth “Betty” Boase. Together they raised three children, Sylvia, Raymond and Roland. Orrill was a salesman for the Coca Cola Fountain Division in Michigan, Regional Manager for Trading Stamp Companies, Sales and Marketing Manager for Beloit Cable Television and Sales and Marketing Manager for Dunrite Travel, where he worked with his brother, Howard Dunn. In 1965 he joined American Theater Organ Society (ATOS). In 1970, he worked to restore the Coronado Theater Organ, a Barton 417. His son Roland assisted him with the restoration project. In 1973 he helped found and organize the Land of Lincoln Theater and Organ Society and served as the first president. Orrill put on public programs sponsored by KATOE. In 1977 he was in charge of the 50th Anniversary of the Coronado, recreating the 1927 theater opening. From 1980 to 1984 he was the staff organist at the Coronado Theater. After his retirement, he taught many local residents to play the piano and organ. Orrill was a member of Court Street United Methodist Church, was a member and past president of Sales and Marketing Executives, served as an assistant scout master and explorer adviser for Boy Scout Troop 23, and was a member of Kiwanis International. He is survived by his daughter, Sylvia (Tedd) Ellis of Denver, Co; Raymond (Janis) Dunn of Oakwood; brothers, Howard (Charlotte) Dunn of Rockford, John (Donna) Dunn of Sycamore; and a niece and nephews. He was preceded in death by his wife and son, Roland. A Memorial Service and Celebration of Orrill’s life will be held on Saturday, June 19th at Court Street United Methodist Church, 215 N. Court Street, Rockford at 11:00 am. Pastor Keith Kelsey Powell will conduct the service. Visitation will begin at 10:00 am prior to the service. Cremation rites have been accorded. Grace Funeral & Cremation Services, Rockford is assisting the family with arrangements. Memorials may be made to The American Theatre Organ Society (scholarship fund), c/o Paul VanDerMolen, 0 North 468 Willow Road, Wheaton, IL 60187 or to Court Street United Methodist Church.

Orrill M. Dunn, 93 of Rockford died at 1:09 pm on Thursday, April 22 in Rockford Memorial Hospital. Orrill was born on November 19, 1916 in Rockford, son of John and Ora (Phelps) Dunn. He graduated from Miami University of Oxford, OH. While... View Obituary & Service Information

The family of Orrill Martin Dunn created this Life Tributes page to make it easy to share your memories.

Send flowers to the Dunn family.