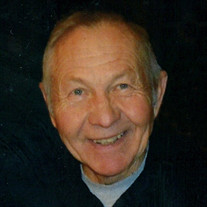 Maynard B. Jarl, 77, of Rockford lived life to the fullest and left an indelible mark on his family and friends. He went to heaven on Tuesday, June 10, 2014 at 4:35 a.m. in SwedishAmerican Hospital, after complications from surgery. He was born on December 27, 1936 in Rockford. Son of Oscar Theodore and Agnes Pauline (Johnasson) Jarl. Graduate of East High School. United in Marriage to Beverly “Bee” Jarl on January 5, 1957. Maynard joined the Rockford Fire Department in 1958, retiring as Captain in 1987. Maynard loved spending time outdoors; he enjoyed riding his bicycle with the Blackhawk Bicycle Club as a member and participated in the Ragbrai Rides across Iowa numerous times with his grandkids by his side. He was a member and active volunteer at Heartland Community Church, where he served on the Hurricane Katrina Relief team in Waveland, MS; on Sharefest teams and stepped up anytime additional help was needed around church. He also volunteered all over the world building playgrounds for Kids Around the World. Everyone who came in contact with Maynard was welcomed by his warm smile and his caring demeanor. His grandkids and great grandkids were the center of his world and love of his life. He truly savored each experience every day he was given. He spent his mornings with his “Coffee Club” at the State Street McDonalds, which he referred to as his “Office.” Survived by his daughters, Judy (Jay) Stover, Carla Nipps, Pamela (Kevin) Flickinger, Xandra (Butch) Stockon; grandchildren, Jason (Jenny), Zandra (Stephan), Justin, Bryan, Jake, Michael; great grandchildren, Kaitlyn, Brayden, Gabriella, Evan; brother, Leonard Jarl; and numerous cousins. Preceded in death by his infant brother, Richard, parents, and wife, Bee. A Celebration of Maynard’s Life will be Friday, June 13, 2014 at 3 p.m. at Heartland Community Church, 1280 South Alpine Rd. Rockford. Visitation at 1 p.m. until 2:45p.m. Private interment in Arlington Memorial Park. Memorials may be made to the family. Grace Funeral & Cremation Services is assisting the family. To share a memory or condolence, visit www.graceFH.com

Maynard B. Jarl, 77, of Rockford lived life to the fullest and left an indelible mark on his family and friends. He went to heaven on Tuesday, June 10, 2014 at 4:35 a.m. in SwedishAmerican Hospital, after complications from surgery. He was... View Obituary & Service Information

The family of Maynard B. Jarl created this Life Tributes page to make it easy to share your memories.

Maynard B. Jarl, 77, of Rockford lived life to the fullest and...

Send flowers to the Jarl family.