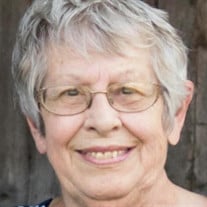 Loving Mother, Grandmother, Sister, Aunt, and Friend Mary Irene (Frommer) Carlson, 78, of Rockford passed away at OSF Saint Anthony Medical Center on March 25, 2022. Born May 22, 1943 in Atchison, KS; daughter of Kenneth and Mildred (Seeber) Frommer. Graduate of West High School, class of 1961 and St. Anthony Hospital School of Nursing on August 29, 1964. She began her nursing career at Passavant Memorial (Northwestern) Hospital in Chicago. Mary then returned to Rockford and worked alongside Pediatrician, Dr. Lash at Canfield Clinic. She moved into long-term care for 30 plus years, of which she was the Director of Nursing at several facilities. Mary was employed at Alma Nelson Manor, and later helped to open St. Anne’s Center as the Director of Nursing. She retired from Fairhaven Christian Retirement Center where she was the Assistant Director of Nursing. Mary’s passion was taking care of others, whether it was her children, grandchildren or patients as a nurse. She had a beautiful garden, was an avid reader, loved trying new recipes and doing puzzles. Survived by her daughters, Kathryn (August) Toldo, Amy (Troy) Dull; grandchildren, Renate and Ander Toldo; Ashlyn and Caden Dull; sister, Jane Gustafson; brother, John (Marsha) Frommer, several nieces, nephews and cousins. Preceded in death by her parents, and brother-in-law, Gerald Gustafson. In lieu of flowers, memorials may be made to St. Jude Children’s Hospital, at www.st.jude.org. A celebration of Mary’s life will take place on May 22, 2022 from 1-3pm at Baumann Park, off 300 S Walnut St., Cherry Valley, IL 61016. We will be located at the Pavilion which is closest to the tennis courts and the playground.

The family of Mary Irene (Frommer) Carlson created this Life Tributes page to make it easy to share your memories.

Send flowers to the Carlson family.