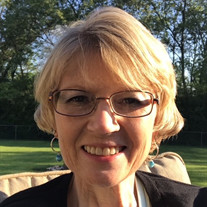 Mary Alice Denowh - November 15th, 1962 - April 11th, 2020 Mary Alice Liebelt Denowh RDH, age 57, of Machesney Park, Illinois passed away on Saturday, April 11, 2020 at OSF St Anthony Hospital in Rockford, Illinois after a battle with cancer. Mary was born on November 15, 1962 in Jordan, Montana to Elmer and Betty Liebelt. She grew up at the Flowing Wells in Garfield County Montana with her sisters Gloria, Deborah, Audrey and brother Bryan. They later moved to Sidney, Montana and then to Glendive, Montana where she graduated High School. She married the love of her life David Denowh on October 19, 1979. In 1980 they moved to Mount Prospect, Illinois where David started his career in computer science. Their first son Scott was born that year as well. In 1982 they moved to Minot, North Dakota so that David could support a company contract with the US Air Force. In 1983 along came son number 2, Joseph. They lived in Minot until the contract expired in 1984 and they moved back to Arlington Heights, IL. In 1985 they moved to Rockford, IL where they lived for 11 years in their first home and 20 years in their second home. In 2016 they moved to Machesney Park to be near their children and grandchildren. During this time Mary first became a Dental Assistant and worked for multiple Dentists in Rockford. She would manage a dental office and eventually go back to school to become a Registered Dental Hygienist. She commuted 40 miles to Huntley and worked at Huntley Dental for many years. In 2017 she became President of the Illinois Dental Hygienists' Association and served for one year. Mary is survived by her husband of 40 years David Denowh; her son and daughter-in-law Scott and Rebekah(Paladino) Denowh of Roscoe, IL; son Joseph Denowh of Machesney Park, IL; Grandchildren Jakob and Madelyn Denowh (Scott & Rebekah); her sister Audrey Bruckner of Miles City, MT; her brother Bryan (Sheila Cramer) Liebelt of Riverton, UT; brother-in-law Don Pawlowski of Miles City, MT; brother-in-law Larry (Karen) Denowh of Sidney, MT; brother-in-law Wayne (Nancy) Denowh of Billings, MT; nieces and nephews: Holly (Shane) Harbaugh, Lee (Charlotte) Billing, Ajay (Sally) Liebelt, Matthew Liebelt; great nieces and nephews: Chantel (Bill) Brooks, Skylar (Kystia) Harbaugh, Ashlie Liebelt, Brittany Liebelt, Brooke Garnes, Kendra Garnes; great great niece and nephews: Edward Brooks, Shayna Brooks and Jaxson Harbaugh. She was preceded in death by her parents, Elmer and Betty (Marsh) Liebelt, parents-in-law Stella (Falkenhagen) and Gene Denowh, older sisters Gloria Billing and Deborah Pawlowski; sister-in-law Beverly (Tom) Otto; brothers-in-law, Randy Billing, Joe Bruckner; her grandparents and several aunts and uncles. Mary had an infectious smile and loved her family. She loved to knit and crochet scarves and baby blankets for anyone and everyone! What she enjoyed most was playing cards and board games with family and friends. She had many friends who will miss her greatly. Memorial Visitation on Monday, September 20, 2021 from 10 am to 11 am, followed by a celebration of Mary's life at 11 am at Grace Funeral & Cremation Services, 4301 N. Main St. Rockford. Interment in Scottish Argyle Cemetery. In lieu of flowers, memorials in her memory may be made to Mary Denowh RDH Memorial Scholarship Fund c/o 400 E. Randolph St. #2305; Chicago, IL 60601. Share a memory or condolence at www.graceFH.com.

The family of Mary Alice Denowh created this Life Tributes page to make it easy to share your memories.

Send flowers to the Denowh family.