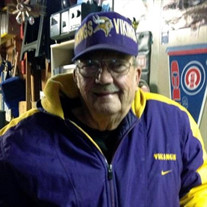 Marv's Life and Story I was born and grew up on a farm in Winona, MN. My dad was Rudolph. My mother was Emma. Dad was a farmer. Mother worked on the farm and at home. There were nine kids in out family. They are Ada, who is 93. Then John, Gary, Henrietta, Elizabeth, Mary Anne, Mildred, Donald and me. I’m the youngest. Only four or five of us are left. I started at a one room country school near our farm. It had eight grades in it. It’s all torn down and gone now. Then I went to parochial school, Saint Mark’s Lutheran in Winona. I didn’t really get into sports at the time. We all worked on the farm and I always had some little part-time job. As kids we did lots of fishing. Winona is right up the Mississippi River. I graduated from Saint Mark’s in 1963. I went to work for Owl Motor Company, which is a Ford dealership. I’d work on cars, deliver cars, fix up cars, wash cars and keep the shop clean. I worked there for about five years. A friend of mine had moved to Rockford. Illinois. At that time, about 1966, Rockford was really booming for work because it was a machine tool town. I went to work there. But in 1967, I got drafted into the Army. I married Pamela eight days before I was drafted. We are still married. Basic training was in Fort Campbell, KY. Then I went to Fort Rucker, Alabama for advanced training. I trained in helicopters and fixed wing as a mechanic and some other stuff. I came home for thirty days leave and went straight to Vietnam. I was there from January of 1968 to January of 1969, so I was there during the Tet Offensive. I was with the 336th Assault Helicopter Company. We were based in Soc Trang, in the Mekong Delta. Unlike up north, we only had one road, Highway 100, which came out of Saigon and ran all the way to the bottom of Vietnam. I was working in a hangar for a while. Then they needed a crew chief and door gunner on one of the choppers. That’s when I got volunteered to be a helicopter crew chief and door gunner. I had been trained for both mechanics and crew at Fort Rucker. With no roads, we were the only transportation around for the troops. I saw some action. If you’ve never been to a place like that it was kind of amazing that there were still places that primitive, that backwards in the world. One time we were out over the rice paddies (we had a lot of rice paddies) and I was sitting on the side of the chopper. Here come mama-san with her broom chasing chickens and pigs out of her hut. It was different, that was for sure. I came home in January of 1969. I could have had an early out, but I didn’t want to extend in Vietnam. I said no, I had enough of that. So many of the them got killed after they extended. I said it wasn’t worth it. So I spent my last four months at Fort Hood, Texas. Pamela came to visit me there a few times, but we never lived there. She stayed at home with her folks. When I got out, I came back to Rockford and went to work at Rockford Products Corporation. They were a fastener company, they made all kids of nuts, bolts and screws. I started out running a machine for probably five years. Then I went into the repair department and was there until I finished up. I worked there close to 40 years, they I retired. That was about 10 years ago. Pamela and I have two daughters, Michelle and Paula. And we have two granddaughters, Brooklyn and Charlie. They all live in Alabama now. Brooklyn is getting married this fall. We also have three great-grandkids, Lincoln, Meila, Hannah, who live in Missouri. We like to go camping and belong to a camping group. We can’t go now because the campgrounds ain’t open. So was are sitting around home. I’m getting caught up on my yard work. I used to like to fish in Winona we were only about three blocks from the Mississippi River. Around Rockford, you have to go to some of the lakes. I haven’t been fishing in a couple of years now. After I retired, I got involved in the VFW. I was in the honor guard for quite a few years. I started coming to the VA quite a few years ago. A buddy told me about it because I had diabetes a little bit. I started going to the VA with that. I’m rated 100% disabled, because I have some other problems too. I go to the Rockford Clinic and come to Madison when I need it. I can’t complain about my care, I really can’t. They’ve been very good about things. Private family services will be held. Grace Funeral & Cremation Services assisted the family. Share a memory or condolence at www.graceFH.com

Marv's Life and Story I was born and grew up on a farm in Winona, MN. My dad was Rudolph. My mother was Emma. Dad was a farmer. Mother worked on the farm and at home. There were nine kids in out family. They are Ada, who is 93. Then John,... View Obituary & Service Information

The family of Marvin Harold Matthees created this Life Tributes page to make it easy to share your memories.

Send flowers to the Matthees family.