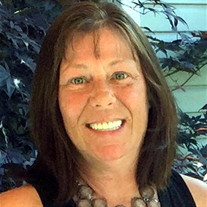 Lisa Renee Wescott, 55, of Rockford died on September 5, 2018. Born on March 19, 1963 in Rockford; daughter of Robert and Vesta (Rockwell) Schafman. Graduate of Auburn High School in 1981. United in marriage to Thomas Wescott on August 7, 2010 in Rockford. Lisa was employed at Instant Jungle for 18 years. Member of United Lutheran Church, where she taught Sunday school. To say that Lisa had a green thumb is an understatement, from an early age she was skilled at resurrecting discarded plants she found in the garbage and dumpsters and bringing them back to life. She filled her home with plants, and shared them with her friends and family. She had a huge heart for rescued animals, caring for them and giving them a new life in the home she shared with her husband. As a child, she fed the neighborhood strays and wild animals. As an adult she raised an orphaned squirrel, nursing it back to health until it could be released. Lisa was a loving and devoted wife, she enjoyed spending time with her husband on road trips across the Midwest in the 2019 Corvette they purchased in March. Survived by her husband, Tom; sons, John Schaffer of Rockford, Ron Schaffer of MS; mother, Sue Schafman of Amboy; siblings, Deb (Bill) Bauer of Rockford, Merle (Laura) Schafman of Kenosha, Rob (Vicky) Schafman of Port Washington, Tammi (Joe) Draheim of Rockford, Cris (Ada) Snyder of Rockford, Lori (Todd) Johnson of Rockford; numerous nieces, nephews, extended family; including Michelle Crouse and Matt Pierson; and pets, Maya and Malakhi. Preceded in death by her mother, father, and brother, Bruce Schafman. Celebration of life on September 15, 2018 at 11 a.m. at United Lutheran Church, 3630 N. Rockton Ave.; Rockford; Pastor Julane Nease will officiate. Memorial visitation at 9 a.m. until the time of service. Lisa’s family has requested that expressions of sympathy be made in her memory to an animal rescue organization of your choice. Grace Funeral & Cremation Services is assisting the family. Share a memory or condolence at www.graceFH.com.

The family of Lisa Renee Wescott created this Life Tributes page to make it easy to share your memories.

Send flowers to the Wescott family.