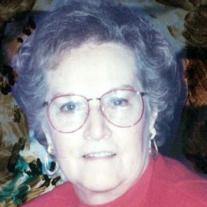 Leona “Lee” Reese stepped into Heaven December 27, 2011 in the presence of her husband and family. She was born on December 8, 1923 in Fairbury, to Claude and Irene Amacher. She attended Fairbury schools, ISNU, and the University of Illinois, where she met Bernard “Bernie” P. Reese Jr. They were married August 31, 1946 celebrating their 65th wedding anniversary this year. She is survived by her husband Bernie; four sons and their wives, Gary and Colleen of Roscoe, Randall and Jane of Rockford, Brian and Jeanine of Donnelly, Idaho, Geoffrey and Pam of Double Oak, Texas; 17 grandchildren, 14 great-grandchildren; and a brother, William and Dorothy Amacher of Oklahoma City, OK. Repenting of her sins at an early age, she accepted Jesus Christ as her Lord and Savior receiving His eternal life and assurance of spending eternity in Heaven with Him. Lee was an unswerving advocate to others of the need to make that decision and be certain where they would spend eternity. A few days before her death she had written in her journal, “Always be ready to give an explanation for the hope in Christ which you have.” To that end, she became involved with evangelical ministries such as Stonecroft Ministries, Haggai Institute, Basic Youth Conflicts Seminar, Bibles for the World, Youth for Christ, Rockford Christian Schools and operated a Christian bookstore. Based on God’s immutable principles Lee developed her own, “Love Being a Woman” Seminar, which Lee gave in many locations around the world including her own home, and authored the book, “We Saw the Sun Rise Twice, or It’s Always Too Soon to Quit.” A Memorial Service will be held on Saturday, December 31, 2011 at 11:00 a.m. at First Evangelical Free Church, 2223 North, Mulford, preceded by a private burial service. Grace Funeral Services is assisting the family. To share a memory or condolence, please visit www.graceFH.com.

Leona &#8220;Lee&#8221; Reese stepped into Heaven December 27, 2011 in the presence of her husband and family. She was born on December 8, 1923 in Fairbury, to Claude and Irene Amacher. She attended Fairbury schools, ISNU, and the University... View Obituary & Service Information

The family of Leona "Lee" Reese created this Life Tributes page to make it easy to share your memories.

Send flowers to the Reese family.