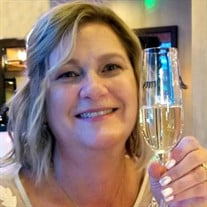 Kelly “Kelly Jean” Siebert Edwards, 55, left this life at 11am on October 20, 2020. She bravely took the cancer head on that did its damage long before she had the chance for a fair fight. Kelly accepted the cards she was dealt with amazing courage and strength, never complaining once or allowing the disease to break her spirit or determination to live every day to its fullest. Kelly was the quintessential American girl from the beginning. The rumor has it she was conceived in a ’58 Chevy in LaSalle, IL to Joyce and Terry and was proud of the fact she shared the same birthday with Johnny Cash. Kelly was always doing something with her hands, and her first encounter with crafts that we remember was at 5 years old when she left her father’s hand at the old Rockford Goldblatt’s store to look at sewing machines then walked several blocks home on her own. This was a precursor of the independent spirit she never lost. She met the love of her life, Mike, on a sunny June Sunday afternoon and she always claimed he was “smitten” from that day on. This encounter lead to a marriage that became just over 29 years of “wedded bliss” as she would say. Kelly knew more than anything she wanted to be a mom and nine months later she brought Grace into the world followed by Hannah five years later. Kelly always said, often with a tear of joy, that these were the best and most rewarding days of her life. She was a superhero to her girls and they eventually gave her the superhero name Kick-Ass Kelly. But soon another sewing machine caught her eye, so she started a long-arm machine quilting business that lasted twenty years. She completed quilts for some of the best quilters across the Midwest, doing all her work freehand, without computers, and won several ribbons and tons of recognition in the process and her work was published in nationally distributed magazines. Kelly always had the desire and ability to reinvent herself to meet her family’s needs so once again she changed paths and studied to become a respiratory therapist. She worked hard, earned her college degree finishing second in her class, and went to work as a mission partner at OSF St. Anthony. Before long she became a team-leader and earned the nickname “Boss Lady” from her co-workers that she wore like a badge of honor. As Kelly completed her end of life journey not a day went by that she did not get cards in the mail or packages left at the door from someone who loved her dearly. She left an indelible mark in this life and touched so many in so many ways. Left to carry on her spirit and memory is her “still smitten” husband and biggest fan Mike, daughters Grace (Jimmy) Bartlett and Hannah (Scott Hallow) Edwards, parents Terry and Joyce Siebert, brother Kyle (Becky) Siebert and sister Krista (Paul) Ruprecht, and faithful companion Lily that stayed by her side every night. There are so many close family members and friends that she enjoyed being with and loved dearly. Kelly was a mom, partner, friend, artist, and truly an American girl. She loved all her pit-bull mix dogs, farmer’s markets, any body of water anywhere, campfires, and a good glass of Chardonnay with some good food and music to go with it. Kelly said she felt like there was something left in this life she had yet to do and Lord knows she will still find a way to do it. Kelly and her family would like to send a very special thank you to ALL of the mission partners at OSF St. Anthony, but especially Natalie, Mackenzie and the entire Respiratory Therapy team for their remarkable and endless generosity, love and support. We love you all and we know you love her. We would also like to thank the amazing OSF Hospice team that kept Kelly as comfortable as possible and reassured until the end. There will be a celebration of Kelly’s life in the near future that will include that good glass of Chardonnay, food and music where family and friends will be able to again admire her life’s work and share stories of the times we had together. Grace Funeral & Cremation Services assisted the family. Share a memory or condolence at www.graceFH.com.

Kelly &#8220;Kelly Jean&#8221; Siebert Edwards, 55, left this life at 11am on October 20, 2020. She bravely took the cancer head on that did its damage long before she had the chance for a fair fight. Kelly accepted the cards she was dealt with... View Obituary & Service Information

The family of Kelly "Kelly Jean" Siebert Edwards created this Life Tributes page to make it easy to share your memories.