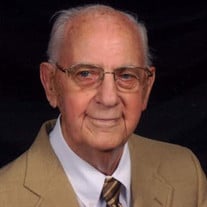 Karl Edward Hoglund, 94, of Rockford died on May 3, 2015. Born on September 28, 1920 in Rockford, son of Arnt and Augusta Hoglund. Graduate of Central High School. Karl served in the United States Navy from 1944-1946. United in marriage to Clarice Goodmiller on January 26, 1946. Retired from Federal Products in 1985. Karl was an active member of Emmanuel Lutheran Church where he served as Property Chairperson. He had a beautiful tenor voice and was a singer in the four-member Early Bird Choir. He was President of the YMCA Retired Men’s Club. He enjoyed golfing and bowling. He was a drummer with the Tebala Shrine Highlanders. Karl had an outgoing personality and never met a stranger. He was proud of his service in the military, and served on the USS Washington. He was grateful for the Honor Flight trip he took at the age of 90. Survived by his wife, Clarice; daughters, Kristin Ives of Springfield, IL, Barbara (Duane) Gustafson of Rockford; grandchildren, Amy (Ty) Hannebaum of Byron, Jeff Gustafson of Rockford, Joe (Kelly) Gustafson of Rockford; great-grandchildren, Jacob and Brooke Hannebaum, Madelyn and Ayden Gustafson, Dylan and Colton Gustafson; sister-in-law, Margery Hoglund of Rockford; numerous nieces, nephews and cousins. Preceded in death by his parents and siblings, John Hoaglund, Kenneth Hoglund, Margaret Weyberg, Dorothy Anderson and Ellen Abbott. A Celebration of Life will be on June 6th at 11 am at Emmanuel Lutheran Church, 920 Third Ave. Rockford. Rev. TroyAnn Poulopoulos will officiate. Memorials may be made to Emmanuel Lutheran Church. Grace Funeral & Cremation Services assisted the family. Visit www.graceFH.com.

Karl Edward Hoglund, 94, of Rockford died on May 3, 2015. Born on September 28, 1920 in Rockford, son of Arnt and Augusta Hoglund. Graduate of Central High School. Karl served in the United States Navy from 1944-1946. United in marriage... View Obituary & Service Information

The family of Karl Hoglund created this Life Tributes page to make it easy to share your memories.

Send flowers to the Hoglund family.