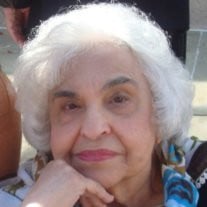 Josephine M. Varalli, 89, of Rockford died March 25, 2013 in Lake Geneva, WI. She was born on December 19, 1923 in Rockford, daughter of Angelo and Angelina Turiciano. United in Marriage to Gerald Varalli on October 11, 1944. They were married... View Obituary & Service Information

The family of Josephine Marie Varalli created this Life Tributes page to make it easy to share your memories.

Send flowers to the Varalli family.