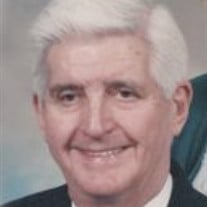 Loving Father, Husband, Grandfather, Ballroom Dancer and Piano Technician Joseph Brown Adam, age 84, of Rockford, beloved husband, father, grandfather, great-grandfather, uncle, brother and friend, passed away peacefully on Thursday, January 14, 2010, at his home, with his wife Joyce at his side, after a long and courageous battle with several types of cancer. His strength, perseverance and compassion will always be remembered by those who knew him. Born on May 27, 1925, he was the son of the late Ernest Frederick Adam and Lena Brown Adam. A native of St. Louis, Missouri, Joe served in the United States Navy during World War II. During the war, he married his first wife of nearly 50 years, Iris Goodpasture Adam, who passed away in 1992. After the war, he played baseball for the St. Louis Cardinals before obtaining his Bachelors and Masters Degrees in Education from Washington University in St. Louis. For more than thirty years, he worked in secondary education in various high schools in Illinois as a teacher, coach and administrator. He retired from Belvidere High School as Assistant Principal and Dean of Men. Joe married Joyce Margretz on November 15, 1993 in Las Vegas, NV. He was a member of Heartland Church in Rockford. Joe’s love for fishing, travel, music, dancing, ice cream and his dog Gracie was shared with his family and friends. He is survived by his wife of seventeen years, Joyce Adam of Rockford; two children, a son, Robert Joseph Adam (Janene) of Katy, TX, and a daughter, Nancy Adam of Big Pine Key, Florida; five grandchildren, Kristin Gerst of Carrollton, TX, Kevin Adam of New York City, Kathryn Tubb of Austin, TX, Samantha Langdale of Big Pine Key and Adam Palmeno of Charlotte, North Carolina; and six great-grandchildren, as well as many of Joyce’s relatives, including Joe’s stepdaughters Laura Hard of Iowa, Debbie (Brad) Rochrek of Iowa and Donna (Paul) Reau of Paddock Lake, Wisconsin, and several step-grandchildren. The family will forever be grateful to the numerous friends who provided loving and prayerful support to Joe and Joyce. They are particularly grateful to the OSF St. Anthony Hospice organization of Rockford who provided outstanding care to Joe during the final months of his life. The family will receive friends from 6:00 p.m. to 8:00 p.m. Monday, January 18, 2010, at Heartland Community Church, 1280 South Alpine Road. A service of celebration and thanksgiving will be held on Tuesday, January 19, 2010 from at 3 p.m. with visitation one hour prior to the service at Heartland Community Church, Pastor Doug Thiesen, officiant. In lieu of flowers, contributions may be made to the American Cancer Society or OSF St. Anthony Hospice in Joe’s name. Grace Funeral & Cremation Services is assisting the family. To leave a condolence online, please visit graceFH.com.

The family of Joseph Brown Adam created this Life Tributes page to make it easy to share your memories.

Send flowers to the Adam family.