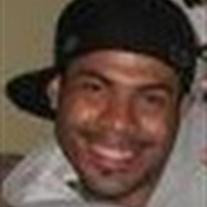 Jonathan A. Williams, 25, of Rockford was found dead Monday July 25, 2011, near Espenscheid Memorial Forest Preserve, having drowned in the Kishwaukee River after tubing Saturday. He is survived by daughter, Cadence, and her mother Amanda B.; father, Charles; mother, Marie; special mention to a special God Mother, Connie Mitchell; older brother,Christian; younger brother, Tyler; 2 half sisters, Terrie (Kevin) Armstrong, Tonya Jackson; numerous aunts, uncles,and cousins in Ohio, Chicago, Indiana, Washington and Texas; 2 nieces, Dayja & Keyra; 1 nephew, Christian Jr., and many other beloved family and friends. Attended Jefferson High School, where he played football, and Rock Valley College. Worked out and lifted weights regularly; loved music, movies, comics, tacos and Chinese food, UFC, sports, and being with his daughter. He was most influenced by Bruce Lee & James Dean. Jon had the biggest most beautiful smile that spread to others like wildfire, was a very easy going, fun & humorous man. Jon was an exceptionally wonderful father to his baby girl! Words will never fully accomplish the meaning of how much we all will miss Jonathan & the Great Spirit within him. “If you love life, don’t waste time, for time is what life is made up of.” –Bruce Lee “If a man can bridge the gap between life and death, if he can live on after he’s dead, then maybe he was a great man!” –James Dean “Real living is living for others” –Bruce Lee A Memorial Service will be held on Saturday, July 30, 2011 at Our Saviors Lutheran Church, 3300 Rural Street Rockford, at 1:00 p.m. Pastor Woody Knutson will officiate. Cremation rites have been accorded. Grace Funeral & Cremation Services is assisting the family with arrangements. To share a memory or condolence, please visit www.graceFH.com.

Jonathan A. Williams, 25, of Rockford was found dead Monday July 25, 2011, near Espenscheid Memorial Forest Preserve, having drowned in the Kishwaukee River after tubing Saturday. He is survived by daughter, Cadence, and her mother Amanda B.;... View Obituary & Service Information

The family of Jonathan Anthony Williams created this Life Tributes page to make it easy to share your memories.

Jonathan A. Williams, 25, of Rockford was found dead Monday July...

Send flowers to the Williams family.