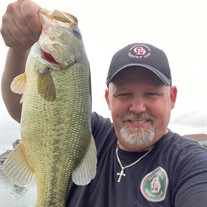 John Louis Magnuson Jr., 46, of Winnebago died on November 22, 2021. Born on June 30, 1975 in Rockford; son of John Louis Magnuson Sr. and Kathy Gunter. Graduate of Rockford East High School, class of 1994. Veteran of the United States Army. United in marriage to Christa Nottingham on March 30, 2019. John was employed for the last 11 years as a Truck Driver at Old Dominion Freight Line. He was their top driver and recently received the One Million Mile award from the company. He was an avid fisherman, he enjoyed taking a photo with his catch and sending them on their way! He loved the Carolina Panthers and the Chicago White Sox. He had a passion for roller skating and had been a DJ at several roller rinks over the years. He recently purchased his dream car, a 2015 Dodge Challenger, and it was his baby. In 2019 he finally attained his dream job at the Rockford Speedway where he made so many friends who were so much like family. He was the creator of Racin' at Rockford; and was a huge fan of Windsor Pizza Parlor in Loves Park. Survived by his wife, Christa; children; Greg and Aaron Magnuson; step-children, Lynnea (Caleb) Blatchford, Koby Nottingham; granddaughter, Eliana Blatchford; father and step-mother, John and Peggy Magnuson Sr.; step-siblings, Russell (Danielle Buss) and Stacy (Nanette Salgado) Magnuson; niece, Deziree Magnuson; several nieces and nephews; grandmother, Joyce Jackson; grandmother-in-law, Elsie Burpo; mother and father-in-law, Jim and Lori Godfrey; sisters-in-law, Kara (Chris) Menken, Heather (Mike) Descourouez; dogs, Alexis and Freddy. Preceded in death by his mother and grandfather Melvin Jackson. John's family is grateful to the staff of OSF Hospital ICU and the NTICU staff for the loving care that they provided as he battled his health complications. Visitation on Saturday, November 27, 2021 from 10 a.m. to 12 p.m. at Grace Funeral & Cremation Services, 4301 N. Main St. Rockford; followed by a celebration of John's life at 12 p.m. Pastor David Petty will officiate. Memorials may be made to John's family to be designated at a later date. Interment in Willwood Burial Park. Share a memory or condolence at www.graceFH.com.

The family of John Louis Magnuson, Jr. created this Life Tributes page to make it easy to share your memories.

Send flowers to the Magnuson family.