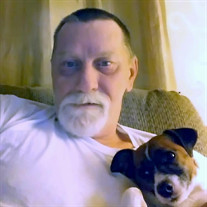 John Raymond Light, 54 of Rockford died on November 27, 2018. Born on June 23, 1964 in Rockford, son of Albert and Mary (Lee) Light. Graduate of Auburn High School. John served in the United States Army. United in Marriage to Sofia Svensson on December 12, 2008. He was formerly employed as a truck driver, prior to him taking on the role of stay at home dad to his daughter, Mandy; who he fondly called his angel. John loved fishing hanging out with his friends and spending time with his wife and family whom he loved so very much. Mandy shared that when he had a chance to eat chocolate, he would. Survived by his loving wife, Sofia; children, Jacob, Curtis, Zach, Steven, Meghan, Ben, Savannah, and Mandy Light; step-son, David Svensson; 5 grandchildren; siblings Don (Barb), Jim (Roberta), Tim (Jelain) Light, Terrie (Gary) Cunningham, Kenny (Jenna) Light; and dog, Brownie. Celebration of Life on Monday, December 3, 2018 at 2 p.m. at 20th Street Missionary Baptist Church, 5280 20th Street, Rockford. Grace Funeral & Cremation Services assisted the family. In lieu of flowers, memorials may be made to his wife, Sofia. Share a memory or condolence at www.graceFH.com.

The family of John Raymond Light created this Life Tributes page to make it easy to share your memories.

Send flowers to the Light family.