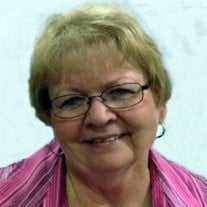 Loving Wife, Mother, Grandmother With a Servant’s Heart For Everyone J. Diana (Lange) Carlon, 65, of Janesville, went to be with her Lord and Savior on Monday, April 22, 2013 at 5:32 p.m. from injuries sustained in an automobile accident. She was born on January 27, 1948 in Arkansas, daughter of Floyd and Reba (Phelps) West. Graduate of Rockford East High School and Delta College in Saginaw Michigan. United in marriage to Erwin Lange on May 10, 1969 in Rockford, he preceded her in death. Diana was previously employed as a receptionist at F.D. West Insurance Agency. She worked with Erwin at Teen Ranch in Marlette, MI, a home for troubled youth where they were employed as house parents. Self-employed as a medical transcriptionist, and most recently employed as a personal assistant at Comfort Keepers. Diana married Paul Carlon on September 22, 2012 in Edgerton, WI. She was a member of Northeast Christian Church. Diana was devoted to her family, and always put everyone else before herself. She was good at taking care of people, above all she loved the Lord with all of her heart. Survived by her husband, Paul; children, Traci (Rob) Davis of Rockford, Todd (Emily) Lange of Andover, MN; grandchildren, Ryan and Sarah Davis, Ashley, Isaac and Elliana Lange; father Floyd West of Rockford; siblings, Terri Smith of Branson, MO, Pamela (Steve) Daly of Branson, MO, and Kirk West of Cherry Valley. Preceded in death by her first husband, Erwin, on October 31, 2011, mother Reba on October 2, 2012. A funeral service will be on April 27, 2013 at 11:00 a.m. at Northeast Christian Church, 5651 East Riverside, Rockford. Pastors Scott Rehfeldt and Michael Leitz will officiate. Visitation begins at 9 a.m. until the time of the service. In lieu of flowers, memorials may be made to the family. Grace Funeral & Cremation Services is assisting the family with arrangements. To share a memory or condolence online, visit www.graceFH.com.

Loving Wife, Mother, Grandmother With a Servant&#8217;s Heart For Everyone J. Diana (Lange) Carlon, 65, of Janesville, went to be with her Lord and Savior on Monday, April 22, 2013 at 5:32 p.m. from injuries sustained in an automobile accident.... View Obituary & Service Information

The family of J. Diana (Lange) Carlon created this Life Tributes page to make it easy to share your memories.

Loving Wife, Mother, Grandmother With a Servant’s Heart For Everyone

Send flowers to the Carlon family.