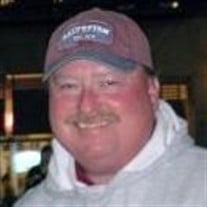 Great Husband, Dad, Papa and Friend Gregory Len Dalton, 56, of Machesney Park died on February 13, 2015 in Rockford Memorial Hospital. Greg’s final moments on earth were spent surrounded by the people he loved the most; his wife of 29 years, Donna, and his beloved daughters. Greg was born on November 20, 1958 in Rockford, son of Guthrie and Joy (Parsons) Dalton. Graduate of Auburn High School in 1976. He married the love of his life, Donna Glodo on September 7, 1985. He was employed at Amerock for 20 years. He was an all-around great guy, with an excellent sense of humor. He loved life, and could often be found belting out songs in the shower or handing out affectionate nicknames to the people in his world. It was rare to see Greg without one of his many ball caps in his huge collection. He was a huge NASCAR fan, and was also devoted to the Miami Dolphins and the Texas Longhorns. Survived by his wife, Donna; daughters, Amanda (Keith) Melvin of Marshfield, WI, Kelly (Ryan) Fagerstrom of Rockford, Krystal (fiancé Scott Doman) Dalton of Austin, TX; grandchildren, Sydney, Dalton and Sophia Melvin and Rylee Fagerstrom; Mother, Joy Dalton of Rockford; sister, Nancy (Rick) Jenkins of Roseville, CA; several cousins; special cousins, Rick and Stevie Dalton; special friends, Bernita Blozis, Debbie and Randy Huckabee and Chris and Jack Mandala; and his beloved dog, Charlie. Preceded in death by his father. Greg’s family is thankful to Dr. Craig Rogers and the ICU Staff at RMH. Celebration of Life at 11 a.m. on Tuesday, February 17, 2015 at Heartland Community Church, 1280 South Alpine Rd. Rockford, with visitation at 9 a.m. until the time of service. Interment in Arlington Memorial Park on Wednesday, February 18, 2015 at 1 p.m. In lieu of flowers, memorials to the family. Grace Funeral & Cremation Services is assisting the family. To share a memory or condolence, visit www.graceFH.com.

Great Husband, Dad, Papa and Friend Gregory Len Dalton, 56, of Machesney Park died on February 13, 2015 in Rockford Memorial Hospital. Greg&#8217;s final moments on earth were spent surrounded by the people he loved the most; his wife of 29... View Obituary & Service Information

The family of Gregory Len Dalton created this Life Tributes page to make it easy to share your memories.

Send flowers to the Dalton family.