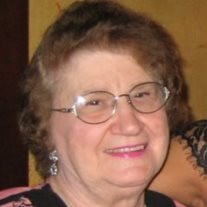 Grace Julia (Schroeder) Hanson, 81, of Belvidere died Thursday, February 27, 2014. Born January 31, 1933 in Kewaunee, Wisconsin, Grace was the daughter of the late Ernest and Julia (Blahnik) Schroeder. She graduated from Kewaunee High School in 1950, where she was a cheerleader. Grace obtained her LPN degree from Michael Reese Nursing School in Chicago. In August 1952 she married Donald L. Hanson with whom she had five children. Grace lived in Rockford from 1953-1960, in Goshen, IN from 1960-1966, and finally Belvidere until her passing. She was an active citizen, having been named the Belvidere Woman of the Year in 1967, and serving as President of several organizations including the Highland Hospital Auxiliary, Lady Elks, Altar Society and Welcome Wagon. She also kept busy as troop leader for the Campfire Girls, and 4-H. Grace enjoyed traveling, with many family trips taken around the United States. In her later years, she visited Switzerland, Scandinavia, and St. Petersburg. Grace is survived by five children, Cathy (Jerry) Mayer of Baton Rouge, LA, Jeffrey Hanson of Belvidere, Marsha (Wil) Schoenrock of Herriman, UT, Bradley Hanson of Memphis, TN, Lisa (Darren) Story of Abingdon, VA; 9 grandchildren, Rachel, Daniel, Michael, Michelle, Zachary, Miracle, Matthew, Maclain and Vanessa; 2 great-grandchildren, Chloe and Andrew. Private family services will be held. Grace Funeral & Cremation Services is assisting the family. To share a memory or condolence, visit www.graceFH.com.

The family of Grace Julia (Schroeder) Hanson created this Life Tributes page to make it easy to share your memories.

Send flowers to the Hanson family.