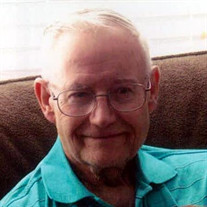 George W. Grant, 78, of Loves Park died on March 4, 2015 in Rockford. Born on March 15, 1936 in Joliet, son of William and Ethel Grant. George obtained his Bachelor of Arts from Northern Illinois University. United in marriage to Merry Jo Malinsky on March 29, 1975 in Estherville, IA. George was the owner of the Paperback Haven, and held a sales position with Newton Advertising. He retired from the Lowe’s Distribution facility. George enjoyed participating in bowling, pool, and golf games and cheering on the Vikings and Cubs. He was a skilled chess player. Survived by his wife, Merry Jo of Loves Park; sons, Eric (Lanette) Grant of Rogers, MN, Brian (Megan) Grant of South Beloit, Adam Grant of Loves Park; step-daughter, Lori Dustin of Minneapolis, MN; grandchildren, Gentry, Hudson, Presley, and Nolan Grant; brother, Jim (Marge) Louch of Joliet, sister, Shirley Liker of Joliet Preceded in death by his parents, and brothers and sisters. A Celebration of George’s Life will be on Saturday, March 7, 2015 at 12:00 p.m. at Heartland Community Church, 1280 South Alpine Rd. Rockford. Visitation at 10 a.m. until the time of service. In lieu of flowers, memorials may be made to the family. Grace Funeral & Cremation Services is assisting the family. To share a memory or condolence, visit www.graceFH.com.

The family of George W. Grant created this Life Tributes page to make it easy to share your memories.

Send flowers to the Grant family.