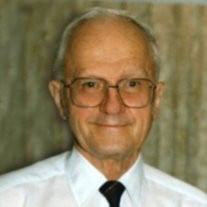 Forest (Forey) E. Block - 89 Beloved Husband, Dad, Grandpa and friend. On February 7th, 2013, Forest Eugene Block was taken from his loving family to be in the presence of our Lord Jesus Christ. Forest was born to Arthur and Truletta Block June 29th, 1923. He graduated from Rockford Central High School and worked to earn money for college. This was interrupted by the draft into W.W. II where he served 4 years in the U.S. Army "101st Guided Missile Battalion." He received training in surveying and helped survey rocket firing ranges. Upon completion of service, he returned to college and graduated from University of Illinois College of Engineering in Champagne/Urbana with a B.S.M.E. On May 12th, 1950 he married Durrell (Dee) Block, whom he had known since childhood. He spent 35 years as manager in proposal engineering, design, development, quality control, assembly and manufacturing of special machines. Most of his career was spent at W.F. & John Barnes Co. but also worked for Ingersoll and Rehnberg Jacobson. Family came first for Forey in so many ways. He also enjoyed working in his yard and maintaining his family's home to serve them. He was creative and painted a little, enjoyed photography, created wood pieces and plaster art. He designed and together with his wife, Durrell, built their first home and designed their second one. As a young man, he won a state championship in a "Ping-Pong" tournament. He loved to be outside, especially during the fall, and to travel out west. His favorites were Rocky Mountain and Yellowstone National Parks. He was an avid reader of history, archeology, old west, scientific studies and Biblical history/archeology. He maintained his sense of humor through most of his life and was sometimes known to pull a kindly practical joke. Forey loved life and tried to find the positive side of troubles. He was a very generous and giving man. We will miss him very much as he has been a big part of our lives in so many positive ways. And we regret he will not have more time to spend with his grandson, whom he loved to interact with and do things for. We also regret that Trent will not have more time to get to know his "Grandpa Forey." Survivors include daughter, Lisa Fountain (Larry) and grandson, Trent. Predeceased by wife, Durrell and his parents. Visitation on Feb. 21, 5:30 - 7 PM at Grace Funeral Home, 1340 S. Alpine Road; Rockford, Illinois and Feb. 22 at 10AM at Christ the Rock Lutheran Church, 8330 Newburg Road, Rockford, IL with funeral at 11 AM. Burial to follow at Greenwood cemetery. In lieu of flowers, memorials may be made to "Rockford Area Pregnancy Care Center," 4921 E State St # 4, Rockford, IL

Forest (Forey) E. Block - 89 Beloved Husband, Dad, Grandpa and friend. On February 7th, 2013, Forest Eugene Block was taken from his loving family to be in the presence of our Lord Jesus Christ. Forest was born to Arthur and Truletta Block... View Obituary & Service Information

The family of Forest (Forey) E. Block created this Life Tributes page to make it easy to share your memories.

Send flowers to the Block family.