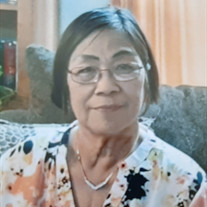 Elisa Ronas Hendricks, 73, of Rockford died on April 27, 2020. Born September 16, 1946 in Sual, Pangasinan, Philippines. Daughter of Modesto and Tranquilina (Bacala) Ronas. Elisa met her future husband William Clark Hendricks at Clark Air Force Base, where she worked in billeting. They were united in marriage on November 2, 1969 in the Philippines. Elisa was the beloved matriarch of her family, and she was also a cherished member of the Greater Rockford Filipino-American Catholic Community. She worked at JCPenney for 27 years as a jewelry specialist. She was an avid gardener and she loved looking out her picture window at all her flowers. She enjoyed playing mahjong and going to the casino with her family and friends. She was a ray of joy and she will be greatly missed by all who knew her. She was very proud of her children, grandchildren and her great-grandchild. Survived by her husband of 50 years, William Clark Hendricks; daughters, Marisa (Warren) Fish, Lilah Hendricks (special friend German Silva), Angela (Stan) Hulsey; adopted children Rowena (Kareem) Mankarious, Divina (Renoehl Molino) Burbano Hendricks, Casamiro Hendricks; Emilaida Hendricks (special niece); grandchildren, Gabriel and Liam Fish, Olivia, Isaac and Lilia Hendricks, Amelia and Vivian Hulsey, Ellen (David Rowe) Welsh, Alex and Gabriel Mankarious, Elexia and Ivan Molino, Jacob Hendricks, Alliah Hendricks; great-granddaughter, Mila Rowe; sisters, Francisca Ortega and Aida (Demetrio Patacsil) Dulay; as well as numerous nieces and nephews. Preceded in death by her parents; siblings Abraham Ronas, Erlinda Burbano, and Precentascion “Precy” Blalock. Due to the Covid-19 Pandemic, private services will be held. A larger celebration of Elisa’s life will be held at a later date and her family will include all of her friends and extended family at that time. Grace Funeral & Cremation Services is assisting the family. Leave a memory or condolence at www.graceFH.com.

The family of Elisa Ronas Hendricks created this Life Tributes page to make it easy to share your memories.

Send flowers to the Hendricks family.