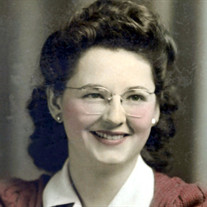 Doris E. Abrahams, 93, of Rockford passed away peacefully in her daughter’s home Sunday, September 7, 2014. She was born November 3, 1920 in Standard, IL to Hazel (Cherry) and Mason Randle. During WWII she worked in a munitions factory and served on a tire rationing board. She married the love of her life, Donald J. Abrahams, at MacDill Field, Florida on July 5, 1944 where her husband was a bombardier instructor. Her first daughter, Diane, was born at MacDill Field while her husband was flying missions over Japan in 1945. At war’s end, they returned to Illinois where, in Streator, her son Bruce was born in 1947. They moved to Rockford where her daughter Dea was born in 1951. Doris was a full time homemaker, loving wife, mother and grandmother, whose family was the most important thing to her. She enjoyed golfing, taking up the sport in her 50’s, and belonged to a woman’s golf league at Atwood Golf Course. She was an avid sports fan, faithfully following the Bears, Cubs and Bulls. Doris is survived by daughters Diane Cook and Dea Abrahams of Rockford; grandchildren Abbie (Chad Cook) Keegan, Marcia (Todd) Houston, Christy (Bob) Luepkes, Bruce (Sandy) Abrahams, Brian Abrahams and Emily (Clifton) Allen; great-grandchildren, Cameron Cook, Alex, Madeline, Cameron, Isabella and Charlotte Houston, Cassidy, Nicole and Sarah Luepkes, Anthony Villani and Zachery Abrahams, numerous nieces and nephews and special family friend Paula Anderson. She is predeceased by her parents, step-father George Simcox, brother William Randle, husband Donald Abrahams, son Bruce Abrahams and son-in-law Gary Cook. Family would like to say a special thank you to Heartland Hospice especially Lisa, Emily and Elaine who made Doris’ last days brighter. Memorials in her memory may be given to Heartland Hospice, 363 Financial Court, Unit 300, Rockford, IL 61107 or a charity of your choosing. Graveside service celebrating Doris’ life will be held at Scottish Argyle Cemetery, Caledonia, on Wednesday September 10, 2014 at 1:00 p.m. with the Reverend Pam Lojewski officiating. Grace Funeral & Cremation Services is assisting the family. To share a memory or condolence, visit www.graceFH.com.

Doris E. Abrahams, 93, of Rockford passed away peacefully in her daughter&#8217;s home Sunday, September 7, 2014. She was born November 3, 1920 in Standard, IL to Hazel (Cherry) and Mason Randle. During WWII she worked in a munitions factory... View Obituary & Service Information

The family of Doris E. Abrahams created this Life Tributes page to make it easy to share your memories.

Doris E. Abrahams, 93, of Rockford passed away peacefully in...

Send flowers to the Abrahams family.