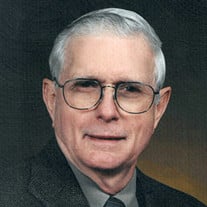 Dean P. Turman went to be with his Lord and Savior, Saturday, July 18, 2020. Dean was born June 15, 1935 in Edgewood to Powell and Jacqueline (Colwell) Turman. Graduate of Stephen Decatur High School, 1953 in Decatur where he met his high school sweetheart Doris Hall. They were united in marriage June 12, 1955. He went to TV Broadcast School in Kansas City, MO. and worked for Cirocha TV. He then went on to work at other TV stations in Pensacola, FL, Oklahoma City, OK and landed back in Decatur, IL working for WAND TV. In 1969 he moved his family to Rockford, IL where he was Chief Engineer for WCEE/WIFR, WQFR & WTVO where he retired in 2005. He also built several transmitters for Television and Radio stations. He was a longtime active member of Lincolnwood Baptist Church where he was always willing to help wherever needed and do whatever needed to be done. While he was able he ran the sound system for the Church and also for a Gospel Quartet ONE ACCORD he was affiliated with. Dean enjoyed riding motorcycles, camping and time with family. He was quite the handyman and it didn’t matter who he went to visit, if they needed any work done, he was ready and willing to fix it. Dean leaves to cherish many memories, his wife Doris Turman, sons; Scott (Sherri) Turman of Rockford, Jeff (Margo) Turman of Davis; daughter, Jacque Lopez of Rockford; grandchildren Tyler Turman, Tori Turman of Rockford, Troy (Brynn) Turman, Tessa Turman all of Winnebago; Holly (Steve) Olson, Alex (Sarah) Turman, all of Davis, Eric (Jillian) Turman, Roscoe; and Jordan (Savannah) Lopez, Seward; step-grandchildren, Brandon Herringer and Carrie Cervantes; great-grandchildren; Alessandra, Kaydence, Jordan, Cordae, Brennan, Hunter, Camori, Halo, Byrdie, Haven, Braxtyn, Haleiah, Tripp, Cairo; step- great-grandchildren, Kriztian, Braeden, Skyler, Keylee’anna, and Keira; sisters-in-law, Sue (Jim) Jim Rice, Debby Clark of Imperial, MO; several aunts, uncles, nieces, nephews and cousins. Dean was predeceased by his parents; son-in-law, Dean Lopez, and granddaughter Miranda Lopez. The family would like to thank Mercy Health Hospice for the wonderful care given to Dean in his last days. Visitation Wednesday, July 22, 2020 at 9 a.m. to 11 a.m. at Lincolnwood Baptist Church, 705 N. Springfield, Rockford followed by a Celebration of Life at 11 am. Pastor Buddy Brown will officiate. Grace Funeral & Cremation Services is assisting the family. Share a memory or condolence at www.graceFH.com.

Dean P. Turman went to be with his Lord and Savior, Saturday, July 18, 2020. Dean was born June 15, 1935 in Edgewood to Powell and Jacqueline (Colwell) Turman. Graduate of Stephen Decatur High School, 1953 in Decatur where he met his high school... View Obituary & Service Information

The family of Dean P. Turman created this Life Tributes page to make it easy to share your memories.

Dean P. Turman went to be with his Lord and Savior, Saturday,...

Send flowers to the Turman family.