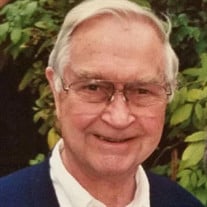 Dean Tollefsrud, 89, of Rockford died on April 21, 2016 in Willows Health Center. Born on September 5, 1926 in Beloit, WI, son of Nile and Edith (Beardsley) Tollefsrud. Served in the US Army during WWII. Graduate of East High School class of 1944 and Northwestern University with a Bachelor of Science in Business Finance in 1951. United in marriage to Patricia Wolff of July 11, 1959 in Rockford. He was Purchasing Manager for Elco Industries, Inc., retiring in 1992 after 41 years. Member of the Unitarian Universalist Church, Rockford, where he served as a board trustee, and on the buildings and grounds and memorials committees. Dean was active in the Center for Learning In Retirement. He enjoyed traveling the world, traditional jazz and the performing arts. Member of the Rockford Ski Club, the Rockford Breakfast Lions and the Rockford Chamber of Commerce, where he started the Leadership Rockford program. Survived by his wife, Patricia; children, Tim Tollefsrud of Thailand, Kay (Walter) Walls of Tacoma, WA, Lee (Hope) Tollefsrud of Oakland, CA; grandchildren, Theo Tollefsrud and Cameron Walls, both of Tacoma, WA, Sionne Tollefsrud of Oakland, CA; brother, Gerald Tollefsrud of Rockford. Preceded in death by his parents; brother, Richard Tollefsrud and first wife, Jean Ward Tollefsrud. Celebration of Life on April 30, 2016 at 2 p.m. at the Unitarian Universalist Church, Rockford, 4848 Turner St. Rev. Matthew Johnson will officiate. Memorials may be made to the church. Grace Funeral & Cremation Services assisted the family. Share a memory or condolence at www.graceFH.com.

The family of Dean Tollefsrud created this Life Tributes page to make it easy to share your memories.

Send flowers to the Tollefsrud family.