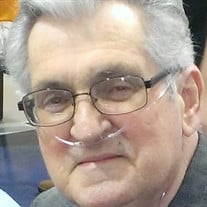 Darrel Lowery, 70, Loves Park, IL joined his heavenly family April 30, 2015 with his wife of 50 years at his bedside. Darrel was born August 20, 1944 in Springfield, MO, son of Cleavan and Hazel Lowery. He married Sharon Hanks in 1964. He served... View Obituary & Service Information

The family of Darrel Lowery created this Life Tributes page to make it easy to share your memories.

Send flowers to the Lowery family.