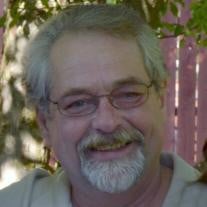 Danny Lee Picchioni, 55 of Rockford went to be with the Lord on Monday, June 18, 2012 at 6:17 a.m. Born on August 26, 1956 in Rockford, son of Wilford and Irene (Peterson) Picchioni. Served in the United States Army from 1975-1978. He was a member of the National Rifle Association, and enjoyed target shooting with his wife. Danny was a member and an active volunteer at Heartland Community Church, where he served on the First Impressions, and OT Teams. He also stuffed bulletins for the weekend services and was always willing to lend a hand with special projects. Danny had an excellent sense of humor, his jokes and laughter will be greatly missed by his family. He was kind and generous and enjoyed helping others. Danny believed in rescuing animals, and loved Angel, Louie, Sharmane and Mitts. He was employed in the Maintenance Department at OSF St. Anthony Medical Center. United in Marriage to Susan Riley on April 23, 1999. He is survived by his loving wife, Susan; children; Christopher Picchioni of MI, Kelly (Ken) Erboe of Loves Park, Ken (Carla) Bernard of Loves Park, Karen (Mike) Boone of Jacksonville, FL, Karl (Kelly) Bernard of Roscoe; grandchildren, Ashley, Timothy, Jacob, Alyssa, Kaitlyn, Seth, Maiya, Karli; siblings, Pat (Larry) Swanson of WI, Betty Ostic of Rockford; and several nephews and great-nephews. He was preceded in death by his parents and sister, Jean Perdle. A Funeral Service will be on Thursday, June 21, 2012 at 3:00 p.m. at Heartland Community Church, 1280 South Alpine Rd. Rockford. Visitation on Wednesday, June 20, 2012 from 5-7 p.m. at Heartland. In lieu of flowers, memorials may be made to the family. Private Interment in Rock Island National Cemetery. Grace Funeral & Cremation Services is assisting the family with arrangements. To share a memory or condolence online, visit www.graceFH.com

The family of Danny Lee Picchioni created this Life Tributes page to make it easy to share your memories.

Danny Lee Picchioni, 55 of Rockford went to be with the Lord...

Send flowers to the Picchioni family.