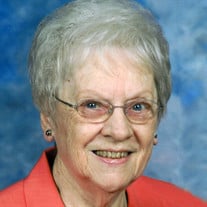 Clarice Georgia Hoglund, 92, of Rockford died peacefully on March 28, 2017. She was born May 10, 1924, in Rockford, daughter of Lory C. and Agnes (Hanson) Goodmiller. After graduating from East High School in 1942, she worked as a stenographer at Barber-Coleman. She was united in marriage to Karl E. Hoglund on January 26, 1946. Karl passed away just a few months before their 70th wedding anniversary. Clarice was a lifelong member of Emmanuel Lutheran Church and belonged to various circles, served as librarian, volunteered in their thrift shop and was a part of the Altar Guild. In addition to being a homemaker, Clarice was the secretary for Dr. Henry Anderson until she retired. Throughout her life she enjoyed many hobbies and interests. She was an avid reader, loved poetry, was a collector, enjoyed travel -- especially to Hawaii. She also enjoyed painting with watercolors, and the oceans. She excelled in needlework, and created miniature rooms, winning ribbons at the Illinois State Fair in both categories. Music was always very important to her. She was also known for her sense of humor. Her family was her greatest joy. She is survived by her daughters; Kristin Ives of Springfield, IL, Barbara (Duane) Gustafson of Rockford. She especially loved her grandchildren, Amy (Ty) Hannebaum, of Byron, Jeff Gustafson of Rockford and Joe (Kelly) Gustafson of Rockford; great-grandchildren, Jacob and Brooke Hannebaum, Madelyn and Ayden Gustafson and Dylan, Colton and Camden Gustafson; sister-in-law, Margery Hoglund of Rockford; many nieces, nephews and cousins. Preceded in death by her parents, and her sister Joan Colloton. Following private interment in Scandinavian Cemetery there will be a Celebration of her life on May 6, 2017 at 11 am at Emmanuel Lutheran Church, 920 Third Ave. Rockford. Rev. TroyAnn Poulopoulos will officiate. Memorials may be made to the church. Grace Funeral & Cremation Services assisted the family. Visit www.graceFH.com

Clarice Georgia Hoglund, 92, of Rockford died peacefully on March 28, 2017. She was born May 10, 1924, in Rockford, daughter of Lory C. and Agnes (Hanson) Goodmiller. After graduating from East High School in 1942, she worked as a stenographer... View Obituary & Service Information

The family of Clarice Georgia Hoglund created this Life Tributes page to make it easy to share your memories.

Send flowers to the Hoglund family.