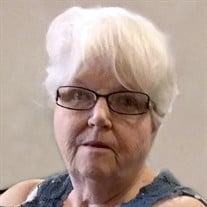 Carolyn Lee Uhlir, 79, of Rockford died October 5, 2021. Born April 10, 1942 in Rockford; daughter of Robert and Melvina (Nelson) Walker. Carolyn was formerly employed as a nanny and hair stylist. She was a member of the Eastern Star. Her... View Obituary & Service Information

The family of Carolyn Lee Uhlir created this Life Tributes page to make it easy to share your memories.

Send flowers to the Uhlir family.