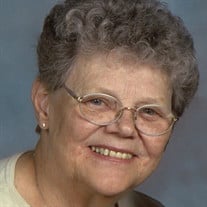 Wife, Mother, Grandmother and Good Friend Arlene Elsie Clegg, 81, of Roscoe died on October 7, 2016 in Premier Rehab in Beloit, WI. Arlene was born on December 17, 1934 in Chicago. United in marriage to Howard Clegg on May 14, 1955 in Chicago.... View Obituary & Service Information

The family of Arlene Elsie Clegg created this Life Tributes page to make it easy to share your memories.

Send flowers to the Clegg family.