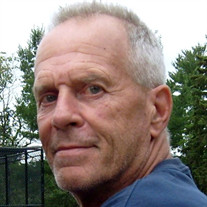 Amor "Sam” Steele, beloved husband, father, grandfather and friend went home to be with his Heavenly Father on July 20, 2014 at 2:40 p.m., surrounded by his loving family. He was born on August 11, 1941 in Rutherford, NJ, son of Edward and Mary (Evers) Steele. Graduate of Freeport High School. Sam lived all 72 years of his life to the fullest, reaching out to those in need and shared his time, treasure and talents with his beloved family, friends, and strangers. On November 16, 1963, he married the love of his life, Sue A. Stevens in Rockford. They raised two children together, Scott (Shelly) Steele of Rockford, Sonya (Darin) Steiner of Loves Park. In addition to his wife and children, Sam is survived by his grandchildren, Christopher Steele, Ryan Steele, Annika Steiner; Aunt Marge Frey of Freeport and several nieces, nephews and cousins. He was preceded in death by his parents; sister, Pat Bruneni and several Aunts and Uncles. Sam was a skilled handyman and woodworker, lovingly referred to by his wife as an “All Around Mr. Fixit.” Sam remodeled their home and created cabinets, furniture and custom woodwork. He also put his skills to use on the Rapid Response Team at Heartland, and on the Sharefest school improvement projects, where he was an active volunteer. Sam and Sue served together as greeters on the First Impressions Team at Heartland Church, where they were members. He was an avid fisherman, and left his handiwork and his many talents around the Rockford area in friends’ homes, businesses and schools. His family and friends treasure the blue bird houses created by Sam. Employed as a Structural Iron worker for 37 years, and member of the Iron Workers Local 498 Union, where he served on the Executive Board and taught welding in the Apprentice program. Upon his retirement, Sam traveled with Sue across the country in their RV, visiting all but four of the National Parks. He also leaves behind treasured friends, Jan and Dale Engberg, Cindy and Bob Toews, and Sheila and Gary Kordash. Sam enjoyed playing cards with them and attending a new release movie each week. A Celebration of Sam’s Life will be on July 24, 2014 12:00 p.m. at Heartland Community Church, 1280 South Alpine Rd. Rockford. Memorial Visitation at 10 a.m. until 11:45 a.m. Pastor Josh Peigh will officiate. Sam chose to donate his body to the University of Wisconsin, where he received treatment in order to further medical research. In lieu of flowers, memorials to Northern Illinois Hospice are appreciated. Sam’s family is very grateful for the outpouring of loving support offered by neighbors, their church family, friends and family. Grace Funeral & Cremation Services is assisting the family with arrangements. To share a memory or condolence, please visit www.graceFH.com.

The family of Amor "Sam" Steele created this Life Tributes page to make it easy to share your memories.

Send flowers to the Steele family.